In multiplayer, online video games, providing currency and items of value in virtual reality can translate into making cash in the real world.

And that’s exactly what Eli Bucher is banking on.

The University of Massachusetts Amherst sophomore is part of a three-member team writing computer code that provides an opportunity to earn money through investments in these virtual markets.

Bucher, a double major in computer science and business, is so confident in his abilities to capitalize on this burgeoning field that he has created a company called Jeffery. Only he needs some help — and money — to get the business off the ground.

That’s why he’s considering applying for a mentorship with Kayon Accelerator, a new Amherst-based entity that will help entrepreneurs with seed capital and hands-on assistance starting in February. In exchange, Kayon will take ownership in small pieces of the companies it invests in.

“We’re at the point where we’re ready to take on money and invest in these games,” Bucher said.

Located at the AmherstWorks coworking space on Amity Street, Kayon Accelerator will offer opportunities for those in the technology field, providing an important link for ideas, including those that start in the classrooms at UMass, said Stephen Garrow, a founder of Kayon. 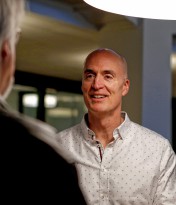 “We felt there was a gap in the ecosystem here,” Garrow said. “We have the lens of investors here.”

Garrow and David Vogel, both Amherst College graduates, and Timothy Mitrovich, previously head of product design and engineering for Bloomberg Law, make up the team that will oversee the work with four to six companies in an intensive four-month class.

Mitrovich said Kayon is seeking “disruptive” businesses, meaning the focus will be on startups “that will really shake things up.”

“This lets us connect to the community and tap into the innovation that is already here,” Mitrovich said.

Kayon will invest $30,000 in each company selected. In exchange, it receives 8 percent common stock in the company.

“We will give them capital, a lot of hand holding and mentorships, and exposure to other capital providers,” Garrow said.

While the Kayon leadership team won’t be on site of the companies they invest in on a daily basis, they will use their extensive contacts from New York and Boston to provide expertise in what it takes to take a business to the next level.

These experts already work with Garrow, Vogel and Mitrovich for the 10 or more teams who receive similar assistance in an accelerator and incubator program in New York.

Vogel said the support ranges from development of business and marketing plans to how to hone a business pitch to investors.

“It should accelerate these teams to get them up and get them launched,” Vogel said. “We’re here to support the teams that come here.”

The teams will work together, all facing the same pressures.

“We are very excited and energized by what we’re doing here, and hopefully we’ll get young companies in here that share that excitement and energy,” Vogel said.

Each class will culminate in a demonstration day at AmherstWorks where investors will showcase their work. The goal is to get their businesses to a place where they can raise additional capital.

Though similar to Springfield-based Valley Venture Mentors that works with aspiring entrepreneurs, Garrow said Kayon will supplement and coordinate functions in a region that has sufficient talent, but not enough means of translating the talent into a successful model.

Garrow said he was approached by Archipelago Investments partners Kyle Wilson and David Williams about the potential in Amherst, and was excited about the chance to return to the college town.

After meetings with business leaders, Garrow said he recognized the opportunity from the proximity to UMass and the interest shown by others, such as MassMutual and its launch of a data science center in downtown Amherst.

Paul Silva, co-founder and chief innovation officer at Valley Venture Mentors, said the executives at Kayon have been mentors for many years and he looks forward to further collaborating with them.

“I am thrilled that our friends at Kayon Partners are creating new opportunities for entrepreneurs and innovators in western Massachusetts,” Silva said.

Amherst Area Chamber of Commerce Executive Director Timothy O’Brien said this will get small businesses, many starting in Amherst, from the shed to the marketplace.

“They seem to be good at catalyzing the process and speeding it up,” O’Brien said.

O’Brien said this could also translate into jobs and other economic development, including the arrival of companies not currently located in Amherst that may apply and be asked to work out of the coworking space for the duration.

“This is recognition that people in the community are creating innovative and investable ideas,” Kravitz said.

Better than a room of one’s own? A local author reflects on the pleasures of writing among friends at AmherstWorks